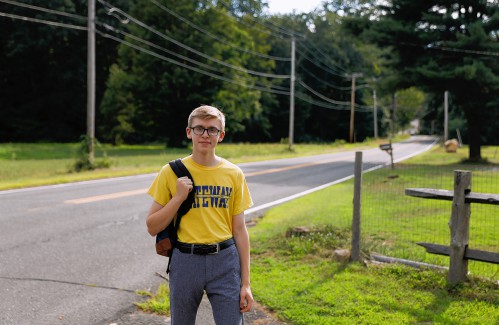 Editor’s note: This is one article in an ongoing series delving into the report of the Select Commission on Rural School Districts.

When the bell rings each afternoon, Joey Pisani prepares for the long bus ride ahead.

Despite living 6 miles from school, the Gateway Regional School District junior endures a 45-minute commute from school due to how the district has to schedule his trips to comply with school regulations. ‘State. Those long bus rides, Pisani added, can be taxing after a long day of learning.

“I’ve definitely come across hour-plus bus rides,” the Russell resident said, based on how the schedule works each school year. “After being in school for about six hours, being on the bus for an hour can be a bit tiring.”

Pisani’s situation is one of many similar stories in Pioneer Valley, as rural school districts are forced to plan long bus rides to keep students in line with state regulations on regional transportation reimbursement. .

Among the state’s transportation regulations, set forth in Massachusetts General Laws Chapter 71, Sections 7A and 16, key issues affecting rural school districts in Franklin and Hampshire counties include: Transportation reimbursement is not available to students living within one and a half miles of the school and buses must, on average throughout the school year, have a load capacity of 75%.

“The Commonwealth will reimburse this district for the full amount expended on such transportation, subject to assignment,” the law states. “Subject to appropriations” is the key point to note because if the state has said it will reimburse schools in full, it doesn’t have to because appropriations can be changed by the legislature.

This reimbursement, however, only concerns regional schools – which are required by law to provide transport for all pupils – and does not cover the full cost of transport.

“Regulations say it’s supposed to be 100%,” Gateway Superintendent Kristen Smidy said, but, she added, the state is keeping it below full reimbursement to encourage appeals. offers between bus companies. “One response we’ve received is that they want to make sure schools do their due diligence and get the lowest offer, which is somewhat insulting as we usually only get one offer because these very extensive bus routes are difficult to respect.”

To ease the financial strain on school districts, while potentially shortening bus trips, the Select Commission on Rural School Districts recommended that the state establish and fully fund a Rural School Transportation Reimbursement Account. Other recommendations include funding transportation for non-residents, such as for vocational schools; allocation of funds for vans accessible to persons with disabilities; and commissioning the Department of Primary and Secondary Education (DESE) to conduct a feasibility study on transportation collaborations.

Nearly 50 miles northeast of Gateway, Ralph C. Mahar District and School Union 73 is in a similar location due to the sparseness and geographic size of its North Quabbin towns.

As an additional financial hit, Teahan-Zielinski said Petersham Center School, which is considered its own district, has to charter two buses just to avoid putting primary school students on a bus for nearly an hour and a half. This is done without reimbursement as only regional districts are eligible.

“We could save money and run just one bus, however, due to the high number of miles, we have to run two buses,” Teahan-Zielinski said, adding that one bus, although cheaper, would affect students’ education by increasing the journey. time. “We can’t do that.”

Smidy said offering bus routes and funding them is a “balancing act” because students need to have a “reasonable length of ride”, but Gateway needs to get as many students on a bus as possible to meet repayment requirements.

Gateway plans to budget nearly $900,000 to transport students from the wide geographic area of ​​Chester to Montgomery each year, while Mahar plans to budget approximately $915,000 to transport students in a geographic area from Petersham to Wendell. Reimbursement rates fluctuate from year to year, but Teahan-Zielinski said they tend to average around 75%.

For Gateway, Smidy said reimbursing 100% of school transportation costs would, at the very least, help the district balance other financial pressures because it’s a “tremendous cost.”

“We would have more stability in terms of the ability to plan,” she said.

Beyond the financial aspect that boroughs have to deal with, there are safety issues that come into play with rural routes, as well as the effect that long bus journeys can have on students. The winding, dirt roads are difficult for buses to navigate, especially during mud season or in bad winter weather. Even in good weather, these roads – usually without sidewalks – are dangerous for students if their bus route does not drop them off at home.

“I haven’t forgotten him. … I left my house at 5:30 a.m. to meet him around 6 a.m.,” Blais said. “David (Spencer) spent two hours on a bus every day like many school children in our rural areas. I remember him talking about how it really impacted the time he had to do his homework and it limited his ability to participate in extracurricular groups and organizations.

Blais added that these bus rides can often be a waste of time for children.

“I thought a lot about all the missed opportunities our students have because of having to spend two hours a day on a bus,” continued Blais. “It’s not like these students could do their homework on the bus, the roads we were driving on were backcountry roads.”

On a hopeful note, Blais said transport reimbursements have increased in his four years in office, but there is still work to be done as the problem needs to be addressed at the root, which includes an aging population. and the lack of economic opportunities in the Valley of the Pioneers.

“Until we fix all of these issues, in terms of jobs and schools, we’re going to continue to see this population shrink,” Blais said. “We view it as being interdependent in this report and interdependent on a larger scale.”

Pisani, a student council representative at Gateway school board meetings, said he hopes state officials pay attention to the struggles of rural school districts and provide more opportunities for people going through this experience to share. their thoughts by “making sure there is a seat at the table for every level of education,” which includes students, teachers, and administrators.