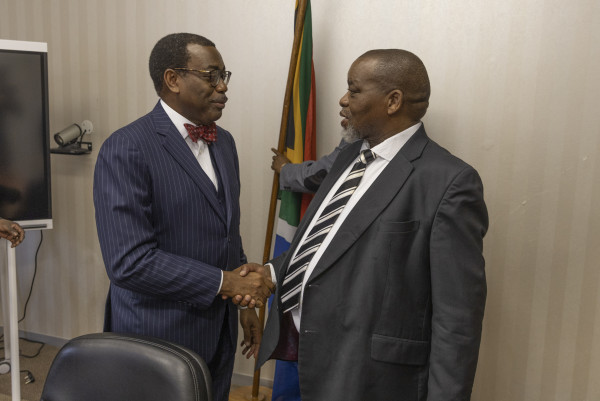 The President of the African Development Bank Group (www.AfDB.org), Dr. Akinwumi Adesina, assured South Africa of the Bank’s strong support as the country transitions from fossil fuels to renewable energy.

Adesina told the Minister of Mineral Resources and Energy, Gwede Mantashe, that the Bank was in the process of setting up an African Energy Transition Facility to help South Africa secure adequate financing for its energy transition.

The African Development Bank estimates that South Africa would need more than $30 billion to switch to renewable energy.

Adesina and Minister Mantashe met in Pretoria, the South African capital, where they discussed a range of opportunities for the country, which depends on coal for 75% of its energy needs.

According to Mantashe, the government has pledged to cut coal-fired power generation by 15% and increase renewables by 18% by 2030.

He said: “We want to move from high carbon to low carbon. The just energy transition plan should be about people’s lives and livelihoods, especially in coal mining areas. We need to develop a concrete alternative economic program for the communities in these regions.

The minister said the government plans to generate an additional 1,500 megawatts of electricity from coal. “We want to be actively involved in experimenting with cleaner coal technology, including carbon capture and storage…If the experiment works, we will expand it and it will reduce coal as a than merchandise.”

The minister said gas and nuclear were part of South Africa’s energy mix. He described gas as a game changer for development and cited Mozambique, whose economic prospects have changed following the discovery of gas.

According to Adesina, solar power should be a key part of South Africa’s energy mix. “Be bold about solar power,” he said. “Africa today has no choice but to get out of coal. But God is good to us. We have 11 terawatts of solar energy. This is the future of Africa. Africa can help make that future a reality South Africa can and should position itself to be the leading manufacturer of polysilicon.

Polysilicon is used to make solar panels and other products, which are currently imported mainly from China.

Mantashe told the President of the African Development Bank Group and his delegation that South Africa had discovered rare earth minerals, which are essential for making solar energy components. “The minerals of the future that will contribute to a green economy are here,” he said.

The Head of the Bank Group and the Minister also discussed the impact on Africa of Russia’s war in Ukraine, which has already led to higher prices for food, fertilizers, oil and gas .

Adesina said the African Development Bank was drawing up a plan to raise $1 billion to finance emergency food production and avert an impending food crisis in Africa.

↯↯↯Read more on the subject on TDPel Media↯↯↯