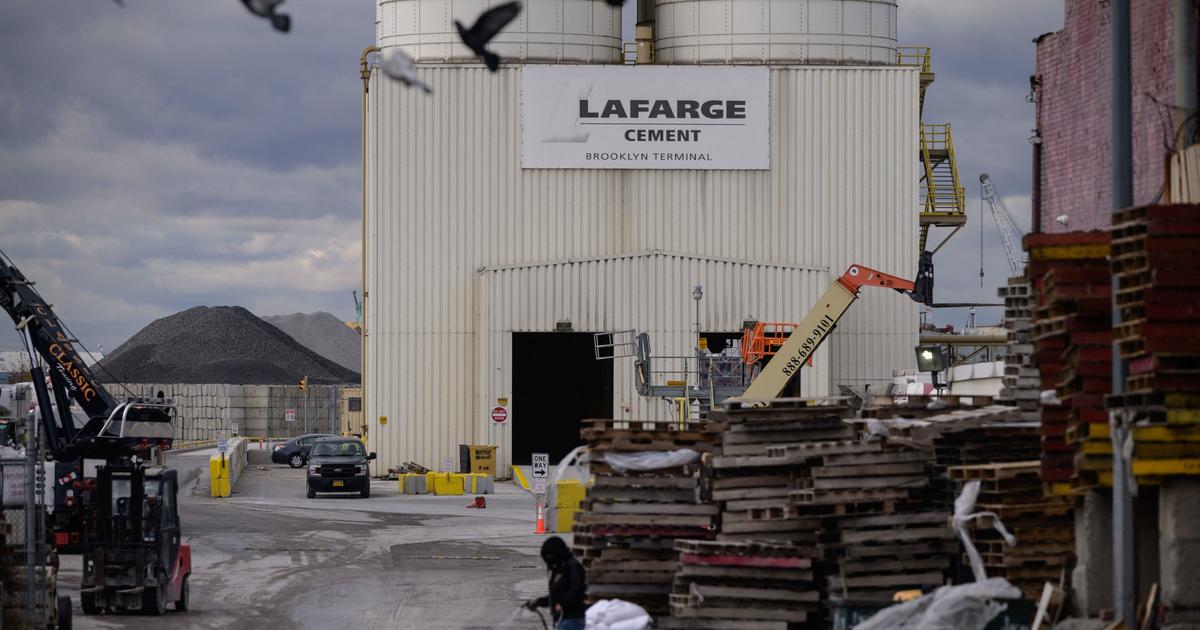 Washington— French cement maker Lafarge has pleaded guilty to one count of materially supporting foreign terrorist organizations, admit in court documents on Tuesday that he paid individuals designated by the United States as terrorists in Syria to ensure the continued operation and protection of a cement plant from 2013 to 2014.

The company agreed to pay $778 million in fines and forfeiture as part of the plea deal.

Since 2010, Lafarge has been operating the Jalabiyeh cement plant in the Jalabiyeh region in northern Syria. According to the minutes, the company admitted that after the outbreak of civil war in the country in 2011, executives and intermediaries devised a scheme to pay members of the Islamic State of Iraq and al -Sham (ISIS) and the al-Nusra Front. (ANF) to secure the operation of the plant and generate profits.

The payments took many forms, the Justice Department said, including “a revenue-sharing agreement” between ISIS and the company that Lafarge executives likened to paying “taxes” to Israel. Islamic State. The more cement the factory would sell to its customers, the more money Lafarge would pay to ISIS.

The cement company also made monthly “donations” totaling $816,000 and “payments to ISIS-controlled suppliers to purchase raw materials needed for the production of cement totaling approximately $3,447,528. “, according to court documents.

The payments enabled the Syrian subsidiary of Lafarge to pass its employees and suppliers through ISIS and ANF checkpoints on the roads leading to the factory and block Turkish competitors.

These funds — which guaranteed both raw materials for production and employee protection — violated federal law, the Justice Department said, and Lafarge was aware of their illegality. Their actions helped the company generate approximately $70.3 million in revenue.

“In their quest for profits, Lafarge and its top executives not only broke the law, they helped fund a violent reign of terror that ISIS and al-Nusra have imposed on the Syrian people,” the court said on Tuesday. Deputy Attorney General Lisa Monaco during the plea. agreement was announced, “We expect much more from companies, especially those operating in high-risk environments.

“Lafarge and its executives had every reason to know exactly who they were dealing with – and they didn’t flinch. Instead, Lafarge forged ahead, working with ISIS to keep operations open, undermine competitors and maximizing revenue. And all the while, through their support and funding, Lafarge has enabled the operations of a brutal terrorist organization,” Monaco said.

Court documents also detailed numerous communications between Lafarge executives and anonymous intermediaries who acted as intermediaries between the French company and the terrorists. The company admitted to paying these people $1,113,324 for their cooperation and covert assistance.

On August 20, 2013, executives of a company wrote in an email: “It is clear that we have a problem with ISIS and Al Nusra and we have asked our partner [Intermediary 1] to work there,” according to court documents. And in another email described in the advocacy materials, an intermediary wrote to a Lafarge executive that he “officially” represented ISIS “for investments.”

“Defendants negotiated and made illegal payments at a time when these groups were gaining territory and brutalizing innocent civilians in Syria and elsewhere and actively plotting against Americans,” said Matt Olsen, head of the National Security Division of the Ministry of Justice. justification – none – for a multinational corporation authorizing payments to a designated terrorist group.”

The shares in question of Lafarge were the subject of an independent review within the company that resulted in a report and corrective action.

According to Holcim Groupthe Swiss multinational that acquired Lafarge in July 2015, “None of the conduct involved Lafarge operations or employees in the United States and none of the executives involved in the conduct are today with Lafarge or affiliated entities” , noting that none of the employees targeted in the federal investigation were found to have shared any of the terrorist organizations’ ideologies.

In a written statement Following Tuesday’s resolution, Lafarge said: “[We] accepted responsibility for the actions of the individual executives involved, whose behavior was in clear violation of Lafarge’s Code of Conduct. We deeply regret that this conduct occurred and have been working with the United States Department of Justice to resolve this matter.”

The fight against Daesh