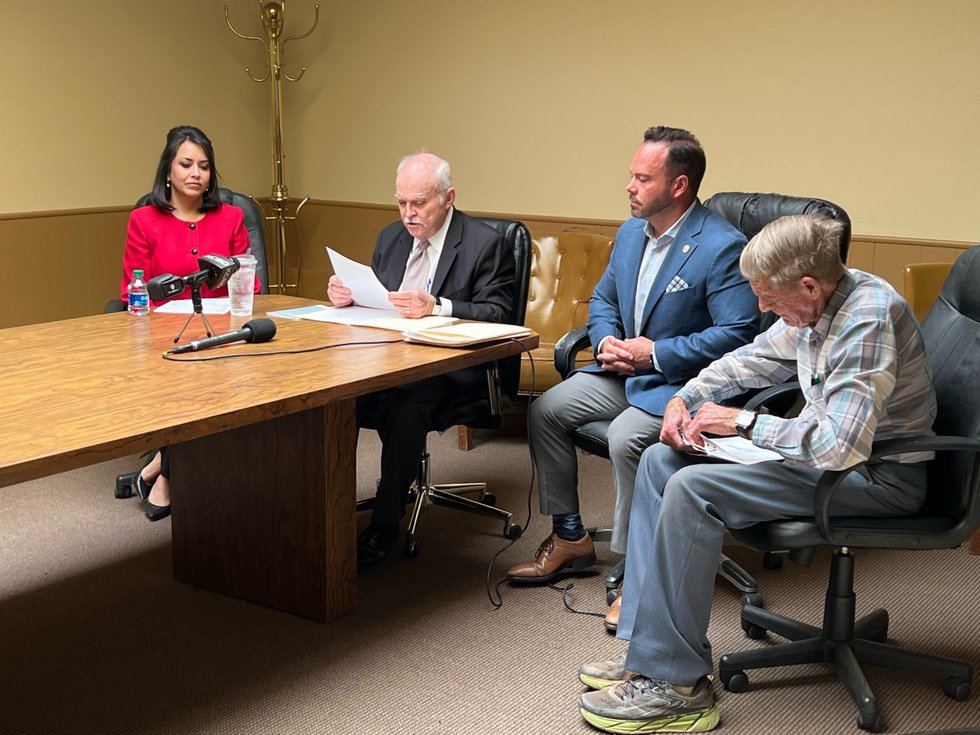 LUBBOCK, Texas (KCBD) — Several candidates for city council are concerned about their opponent, Dr. Jennifer Wilson, and her ties to the Lubbock Professional Firefighters Association. All four District 5 candidates except Wilson: incumbent Randy Christian, Chase Head, Keri Thomas and Bill Felton say they are worried about the association’s political spending to support Wilson.

At a joint press conference Tuesday morning at the Lubbock Cotton Exchange, the candidates voiced their grievances against their competitor. Christian says it was the result of a dialogue on Facebook. He posed this question to his social media friends: “Is city council candidate Dr Jennifer Wilson bought and paid for by a union?

“Is it a sour grape? Or is it because of the prediction that I might lose my council seat? I let you think what you want. Even the idea of ​​a special interest group like a union virtually holding a seat on city council is far more important than my re-election,” Christian said. “All of our firefighters, all of our first responders will always have my respect, gratitude and support. It’s a runaway union that’s being pressured by state and national leaders to become more politically involved at the local level, and maybe even try to take control of city hall.

Christian also calls Dr. Wilson a compromised candidate, as her husband Nick Wilson is deputy chief of Lubbock Fire Rescue. Christian says it’s likely he’ll be the next leader. He says that on numerous occasions Wilson has said she will not recuse herself on fire department matters on city council. According to Texas ethics law, she is not legally required to do so unless it directly relates to her husband’s salary, compensation, or promotions.

“Did you need a lawyer to tell you that it might not be a good idea not to recuse you?” I believe the people of District 5 in the city could give you very different advice than this attorney. The fact that Dr. Wilson is married to a deputy leader is a big deal and voters have a right to know that fact, and others,” Christian said.

At the press conference, the candidates made it clear that they were not accusing Wilson of anything illegal. Head says he worries about financial deception. He says contributions made to support Wilson through advocacy spending don’t show up in his campaign finance reports, making them harder to find.

“That makes it one of the most expensive campaigns in Lubbock history, if not the most expensive for a Lubbock City Council race,” Head said. “I think voters in District 5 need to know that there is a conflict of interest that already exists there. And then you see those exorbitant numbers being spent on that, I think that’s something every voter needs to know.

In a response, Wilson says the policy of personal destruction has no place in Lubbock. She calls the accusations false and an attempt to smear her reputation in a competitive election. She writes: “Let’s be clear, I make no apologies for the many good people who support my campaign. I take very seriously an attack directed at our first responders and the idea that their voices should be silenced.

The firefighters association posted several times on its Facebook page, writing that it was setting the record straight. Responding to why the association issues endorsements, the statement reads: “As long as politicians and their employees affect fire service operations and support, they will advocate for a strong fire service, financial responsibility and adherence to national safety standards.” The group has also stated that it is not a special interest group. These posts also showed support for Tray Payne for mayor and Christy Martinez-Garcia for District 1.

Head says some of the firefighters’ PAC spending went to candidates for other races, but that doesn’t compare to what was paid to support Wilson.

Thomas says she appreciates the Lubbock firefighters, but an entity with too much power is hurting the electoral process. She says that in the past, city council campaigns ranged from $35,000 to $75,000. She says that amount of money is not illegal, but it looks like the fire association is trying to buy a seat.

“There’s no way we the people, all the ordinary people who want to serve their city can compete with a big union’s big slot machine. I fear Lubbock will end up like New York, Chicago or Detroit, where the unions have a stranglehold on the selection and selection of future candidates,” she said.

You can read the response from the Lubbock Professional Firefighters Association here:

“Your firefighters in Lubbock are encouraged by the strong interest in our local elections. We also need to set the record straight on an important issue. Some ask why firefighters support election candidates. The answer is simple: as long as politicians and their employees affect the operations and support of our fire service, we will advocate for a strong fire service, fiscal responsibility and adherence to national safety standards. We support candidates from all political backgrounds. All local candidates are invited to meet with us. Some decline. Many accept. Raising awareness of public safety issues in politics costs money, of course. Because we believe so much in political action, our members pay for this activity out of pocket. No membership fees ever go to political campaigns. We are not a special interest group. Our interest is public safety and the safety of our members. We pride ourselves on providing excellent service, being good stewards of the city’s resources and giving back to the community. Thank you for your support.”

Bill 13: the law on financial innovation: an opportunity to play in the sandbox | Bennett Jones LLP